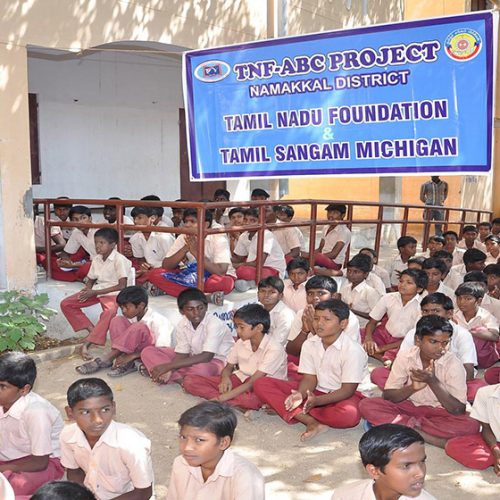 Educating poorest of the poor

The initial focus of the project was to enable grade level proficiency for underprivileged rural students who otherwise will become school dropouts. Based on the positive feedback on the pilot, ABC project’s scope was expanded to benefit all students, ranging from academically challenged to highly ambitious, in TNF adopted schools.  As of 2017, ABC projects are operational in 50 government or government aided schools across 10 districts in Tamil Nadu and has enriched more than 50,000 students.

The 3 core components of the ABC initiative are:

Dr. Somasundaram, director of TNF along with Chennai executive director Mrs. ManmathaDevi, visited Kalanjiam project and reviewed the methodology and visited many schools in Sivaganga district. They had extensive discussions with education officials and community leaders in Sivaganga area, TNF Chennai chapter. They also reviewed the special coaching sessions conducted at Elathur and Kattupakkam schools. With input from TNF board USA, Dr.Somasundaram came up with a winner, the ABC Project. Results show that students who are part of the ABC Project have become academically competent and on par with fellow classmates. Armed with this good information, TNF has launched a second cluster in Vellore, North Arcot district in five schools. The third cluster is slated for Cuddalore.